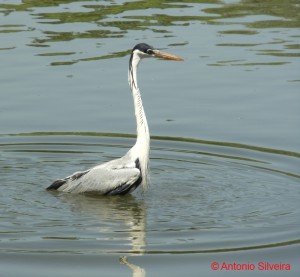 Although the city of São Paulo is one of the largest cities in the world has only 3.56 meters square of green area per inhabitant (which amount to about ten million), and the internationally recommended ratio is 12 square meters per capita.

Originally the city of São Paulo had much native vegetation characterized by known Atlantic Forest, which was gradually being destroyed considering the expansion of the city. Still has some city parks and three state parks (Cantareira State Park, State Park Jaragua, Parque Estadual das Fontes do Ipiranga), which offers its residents and visitors the opportunity to have a closer contact with nature.

Many of these areas have natural vegetation representative of the Atlantic and / or reclaimed or exotic vegetation that provide habitat for many species of birds, making them beyond a leisure space, a space for the observation of nature itself.

The bird watching is a healthy activity, educational and relaxing, where one can spend a few hours together distracted nature. Also can become an activity to provide an opportunity to strengthen ties of friendship with people interested in environmental preservation.

We dont refer to leisure facilities such as parks playground, sports courts etc, because it is not in the case of bird watching, because what matters most is whether the observer has mainly birds and vegetation.

Thus, we conclude that despite its immensity as mega-metropolis, the city of São Paulo still has some green areas consistent mainly in public parks Important Bird remaining. We can not forget green areas represented by the public squares which also hold favorable environment for some bird species, so the bird watcher also has a stronghold on them for their comments.

So, we decided to relate the state and local parks in the city of São Paulo, with some observations on some of them. by Antonio Silveira.

–  Some public parks (or places) of São Paulo city, with observations.

–  List of other municipal parks in São Paulo city